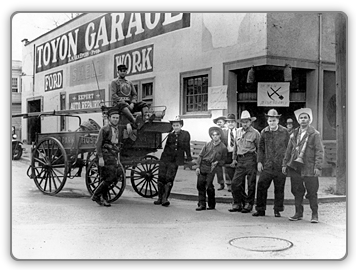 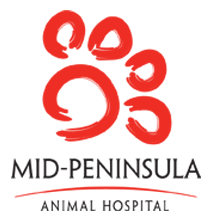 Mid-20th century look at the corner of Merrill St. and Santa Cruz Ave., with the Menlo Park Caltrain station across the street from the little house that preceded the opening of Mid-Peninsula Animal Hospital™ in 1963. The hospital's expansion into the corner building (next door) began in 1998. The palm tree in the yard kept watch over the developments and remains to this day.

For the last half-century, Mid-Peninsula Animal Hospital™ has partnered with the community to care for pets--but the location upon which it's built served animals more than 150 years ago.

Reaching back all those years, finds our block with hotels and livery stables where guests and locals waited for the train to San Francisco. The station opened here in 1863. It was the end of the line that ran from Menlo Park to San Francisco; which was also the first railroad line to be completed in California.

Locals, including Jane Stanford, kept their horses under the shade of the grand "Menlo Oak" which stood across Merrill Street from where our hospital stands today. Jane often rode to the train station, which opened in 1863, on a private path from the home she shared with her husband, Leland, the train magnate and her co-founder in the project that became Stanford University.

Jane's activities in the community included co-founding Palo Alto's Humane Society, which highlights the long standing, animal-focused energy of this community that we work so hard to serve today.

The first building of today's facility was built 100 years later by Dr. Cal Roper. At that time, the number of medicines available to a veterinarian could be counted on one or two hands. He came to California from Greenwich, Connecticut in 1962, built the hospital, and opened it in 1963. He lived with his family in Menlo Park and served this community as a veterinarian until 1980, when he sold the practice to Dr. Robert Bradford.

The scope of operations grew as did the scope addressed by the profession - he and his team added an emphasis on high-quality dental care and university-quality veterinary medicine. The discipline as we know it, began with the care of horses and livestock, and has evolved tremendously.

Today, veterinary medicine includes technology and techniques which parallel those used for the care of humans - including digital radiography, and here specifically, the first pulse oxymeter and first cardiac monitoring devices used in veterinary practice.

The inventor of the first successful pulse oxymeter donated it to this hospital for use on his dog, and any other animal - just as it become widely available for use on humans. You might recognize it described as "that thing you see on a person's finger at the hospital." It measures oxgyen saturation of the blood at the extremities, a critical data element which it captures in a non-invasive, simple way. We still use it today! This is just one example of how the community's passion for giving their pets the best possible care has contributed to the ongoing evolution in this practice, and creates a tradition of community collaboration.

So, how would you guess that we became among the first to use cardiac monitoring for anesthetics? Indeed, our clients drove it! On a tour of the hospital, some surgeons from Stanford, who knew about the modern (expensive!) cardiac monitors for pediatric patients, suggested their use. Over the years, our hospital clients donated them in memorium of pet patients.

In 1996, the management team that serves you today bought the practice and expanded it, quadrupling the treatment space in 1998 and broadening again in 2001 to create an animal art gallery (whose proceeds go to humane endeavors), and now Scout's House - both complementary offerings.

Our treatment space expansion enabled us to build the team and facilities patterned on a human hospital -- including a staff of dedicated RVTs who serve as licensed veterinary nurses to treat the patients who visit us.

The Mid-Penninsula Animal Hospital™ community at large is unique, and as you can tell, engaged.

Our mission entails responding and evolving to meet and exceed the needs of the community to serve patients. We continue to respond to the call to collaboratively innovate and grow with you.